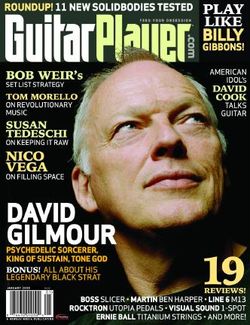 Guitar Player: Do you think in terms of scales and conventional harmony, or are you playing more intuitively?

David Gilmour: I have no idea about scales. I didn’t really know what scales I use, or even that I was using anything unusual, until I started playing the saxophone. I would be playing for my sax teacher, and he’d say, “Oh, you’re playing in Slombonian and Lilliputian,” and I’d have no idea what he meant. He would play me that scale, and I would say, “Yeah, I guess that sounds like the choice of notes that seems to be right for me at that particular moment.” He was quite surprised at the variety of different scales that are a part of my normal working palette. I’m not trying to sound like an idiot savant—I know my stuff—but I don’t know all the names of the different scales.