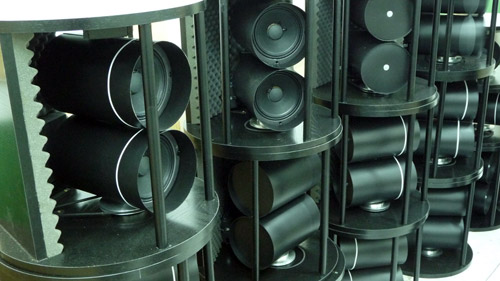 Giampaolo
Hello Alvaro, tell us briefly about you … Who are you and why you decided to make these revolving speaker.

Alvaro – Tolerance Sound
Hi, I’ve been building amplifiers and effects systems for years. Some time ago I purchased a YAMAHA RA-200 and felt a little disappointed by the amazing heaviness and bulkiness of the unit. It was actually a small part of it that counted, the three (out of sync, which is fundamental for the right effect) rotating speakers. The rest of the unit were normal “fixed” speakers.
I thought it would be nice to have just the rotating part, and leaving the rest of the “normal” sound to my regular guitar amp. Then I realized that’s exactly what David Gilmour was doing with the Doppolas system, relatively small speakers which supply the effect and don’t mess with the bass frequencies, and his normal rig blended with them, to supply the normal sound and the lower end.

Giampaolo
Compared to doppolas used by Gilmour, what are the differences?

Alvaro – Tolerance Sound
Gilmour’s units were based on the Maestro Rover. But he wanted to supply more power, and be able to use an amplifier of his choice, so he didn’t include power amp or preamp at all, it’s “just” the speakers, which can (and should) be fed by an external head.
Our units are built to the same specs are Gilmour’s (same size and speaker type, mercury contacts, etc) with some differences:
– Gilmour controls for the speed and circuit are built in a rack unit. We managed to install the circuits and a control plate in the unit itself, which we think makes the Revolver more modular.
– Speed range is wider in the Revolvers.
– The cillinders material is PVC in the case of the Doppolas, but we used a softer plastic (with foam inside) in order to avoid using PVC, which was forbidden some time ago in some countries for being toxic. We have enough “toxic-ness” with the mercury contact.
Basically those are the differences in, on the other hand, very similar units.

Giampaolo
How to use these system?

Alvaro – Tolerance Sound
You can think of them as guitar cabinets. So you obviously need an amp head to feed them.
Depending on your guitar amp you could connect them in parallel with your normal speakers, but the recommended way would be to use another head so you have control over the mix (meaning, how loud you want the Revolver sound compared to your normal sound). I change the balance between songs, in some of them (“Us and Them”, “Coming Back to Life”, for example) being actually louder than the “fixed” cabinet sound.
Another factor is, although one unit sounds good by itself, two units are needed for creating the best sound. Just like other systems (like the YAMAHA itself, which has internally three speakers rotating out of sync), the sound given by two units rotating at different speeds make them interact between them, cancelling/reinforcing their frequencies in a always changing pattern. That’s the way Gilmour used them, and there’s a reason for that.
A fundamental thing is finding the right spot for them. Rotating speakers (of any kind) change their sound dramatically from one room to another or even different spots in the same room. If the room has a lot of reflections, a lot of the effect os lost, because when the speaker is not facing you you still can hear the highs when they rebound on the walls, which makes the difference in sound when the speaker is facing you and when is not less dramatic, which lowers the effect. Also it’s important to have the speakers at your ears level: being the high frequencies always very directional, if the speaker is not pointing to your ears, you won’t hear the effect that much.
Another important thing is miking the unit. You should first experiment with mic positions (much more important on this kind of devices than mic type), you’ll find that miking them too close give too much of an annoying tremolo effect, so a little further is recommended, like half a meter or even more. Experiment.
Also two mics for each unit better than one. Lately I’ve been using mine (I have to shoot some youtubes showing how cool is this) with two mics each, 180 degrees between them, panned (the mics) hard left and hard right, so the sound “rotates in your head” and when adding the second Revolver miked this way is just total psychodelia.

Giampaolo
What is the difference between the two models?

Alvaro – Tolerance Sound
Honestly, the difference in sound is small. The P16 is *slightly* darker because the smaller cabinet. Its size is exactly as a Maestro Rover, actually you can think of it as an improved Maestro Rover; in terms of signal transmision, the Rover has just a piece of metal which makes contact with a rotating piece of metal, which is quite rudimentary (and noisy in terms of sound pureness) when compared to a mercury contact, which has a perfect signal transmision.
Advantage of the P26 is, being two speakers, you have more range were you can hear them properly, since, as I said, sitting them at ear level is recommended.
And last but definetly not least, the P26 is far more sexy than the P16!

Giampaolo
What kind of speakers and materials are used?

Alvaro – Tolerance Sound
The speakers are 6″ 100W ones, chosen to be clear and blend perfectly with a regular guitar cabinet.
The cabinet is made of wood, and the axis is steel.

Giampaolo
Add anything you want on your Revolving Tolerance Sound and Speaker.

Alvaro – Tolerance Sound
For me the Revolvers have had such a major impact in my sound. Not only the rotating sound (which, in some degree, in some songs louder than others, I add to almost every song) but I found that the Revolvers add certain frequencies that make the guitar cut so much better in the mix.
I just played some gigs on islands where I couldn’t take them with me and I really suffered the whole show with what I missed!